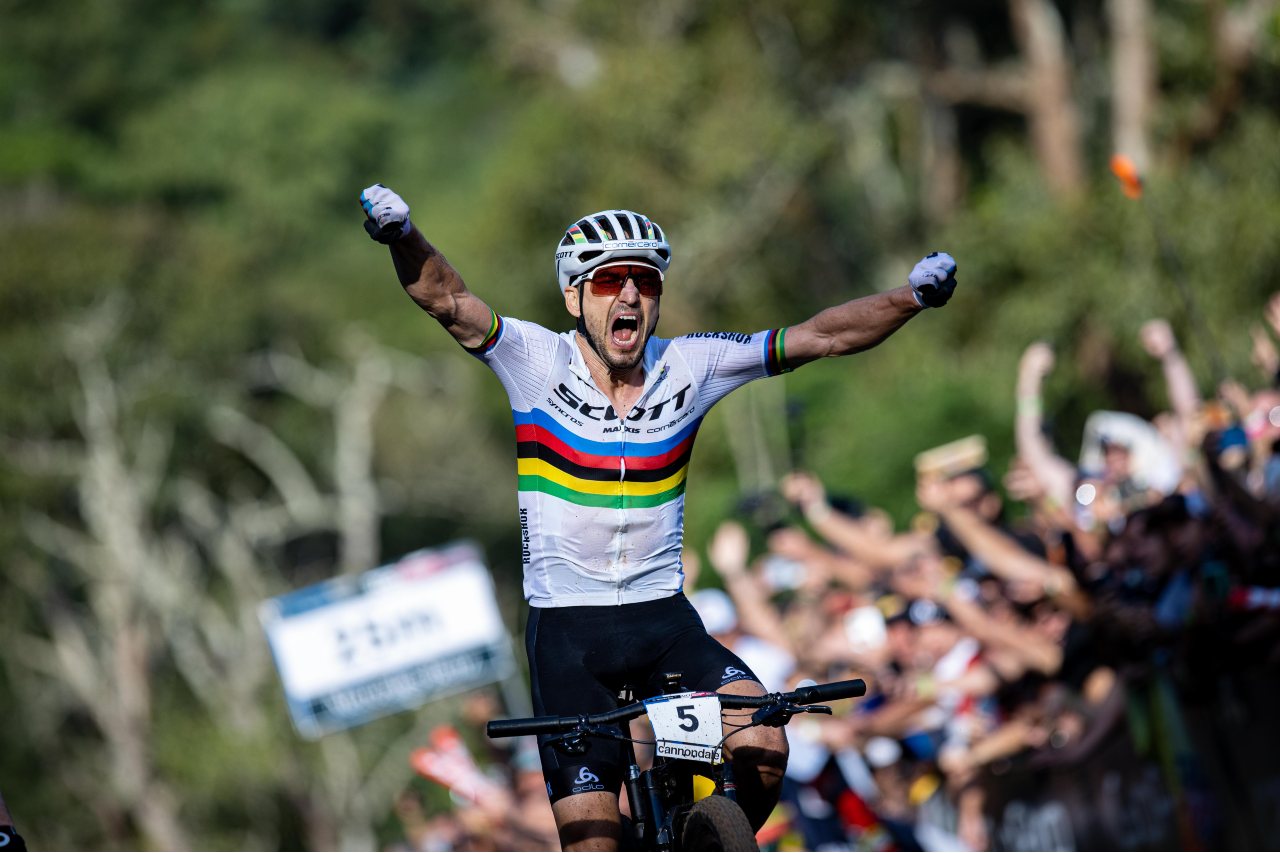 Emotion until the last second. This is how the Swiss Nino Schurter won this Sunday (10) the race in the XCO – Olympic Cross Country, in the Brazilian stage of the Mercedes-Benz Mountain Bike World Cup. With a breathtaking final sprint in the last meters, Nino ended the dispute with a time of 1h26min52, with the French Maxime Marotte in second place, in the photo finish. Vlad Dascalu finished in third place, just three seconds behind. The podium also featured the Danish Sebastian Fini, in fourth, and Filippo Colombo, from Switzerland, in fifth.

Seven times overall champion of the Mercedes-Benz Mountain Bike World Cup and nine times world champion, Nino has always been among the leaders of the dispute. At 35 years old, he showed great form with an incredible final straight of the race. Much applauded by the Brazilian public after his 33rd victory in stages of the Mercedes-Benz Mountain Bike World Cup, which made him equal the Frenchman Julien Absalon, Nino Schurter was thrilled with the result.

“It was really cool to win here. Brazilian fans are crazy about mountain biking and I love them. I just have to thank them for the support they gave me”, thanked Nino. “During the race I thought about whether I would decide on the climbs on the last lap. When we passed the straight back from the finish, I tried to accelerate but I realized that Marotte and Dascalu were on my route. So I knew that on the last climb it would be all or nothing. I did my best, Marotte passed me and I knew there were still many meters to go to the finish line. It was in the last meters. Winning races like this, where you have to fight until the final meter, is really cool. of the tastiest victories and I will keep it forever.”

With the public returning to the Mercedes-Benz Mountain Bike World Cup races, the Swiss highlighted the more than 20,000 people present that rocked the São José Bike Club, in Vale do Cuiabá, this Sunday.

“It was two years without a massive presence of public and I was missing that. Coming to Brazil, with so many fans, was really cool to see. I really love Brazilians. They are crazy about the sport and live for it. I can only say thanks to the fans. I’m very grateful for the people who had the party outside the track. I also thank Avancini, for having done such a great job for the sport, here in South America, especially in Brazil. It’s cool to see how the sport has been developed by his actions in his home country”, he highlighted.

Highlights also go to Marotte and Dascalu, who opened more than 50 seconds ahead of fourth place, the Danish Sebastian Fini. The trio’s performance was even one of the points highlighted by the Frenchman.

“It was a good race. I believe the three of us, Nino, Vlad and myself, were the protagonists from start to finish. We fought for victory from the beginning. We arrived together on the final climb, I tried to stay ahead of them but I lost in the sprint. Honestly, I’m disappointed because I’m still looking for my first World Cup stage win. It’s part of the game, Nino was stronger than me and that’s how it is”, lamented the Frenchman.

Julien before the start (Fabio Piva)
Manager of the BMB MTB Racing team, Frenchman Julien Absalon was present at the competition accompanying his team and spoke about the victory of Nino Schurter, which equaled him in number of victories in stages of the Mercedes-Benz Mountain Bike World Cup.

“He had been close to equaling my record for some time and now he has. Let’s see if he gets his 34th win, to beat my record, which for me is not a problem, because he deserved to get here. Nino had a beautiful race and it’s really cool to see him ahead of so many athletes of the new generation. New young riders are coming and Nino is still strong enough to beat them”, analyzed Absalon.

The Brazilians at the race

Best Brazilian in the race, the Petropolitan Henrique Avancini, in tears, crossed the finish line in 13th place – he even finished second in the second lap. He received a standing ovation from the crowd, who shouted “Avança, Avança” at every turn. Avancini, who couldn’t contain his emotion, was constantly thanking the crowd that chanted in support. The Petropolitan was still greeted by other athletes, who recognized his great effort in bringing this stage of the World Cup to Brazil. Emotional, he spoke about the moment he had lived.

“It was the most special, intense and remarkable moment of my career. I would very much like to have delivered a much better result than I did in both tests. For me, today shows the meaning of a life dedicated to sport. The affection and intense support I received from people is something inexplicable. It’s proof that it was worth dedicating your life to it. I would do it all over again, the same resignations and the same choices. Because this weekend was special for me and for the sport I love so much.”

Special result for Danish cyclist
For the first time on a podium in stages of the Mercedes-Benz Mountain Bike World Cup, the Danish Sebastian Fini celebrated his fourth place in Petrópolis. Fini was probably one of the cyclists who won the most positions during the race. After closing the first lap in 18th place, the cyclist evolved lap by lap, overtaking cyclists and gaining confidence, to reach fourth place only on the last lap.

“I’m passionate about Brazil. I’ve had such good races here in the past. It’s crazy to finish in fourth place. I came here expecting to do a good job and, who knows, get a top 10. Last week, at the Michelin International Cup of Mountain Bike, I felt so bad. And that’s why my expectations were lowered for today (Sunday). Sometimes I do my best when I go to a race with the thought of having fun. That’s what happened. It was unbelievable”, vibrated.

CIMTB Michelin
The CIMTB Michelin organization held its first event in 1996. Since then, it has been innovating and actively contributing to the growth and strengthening of mountain biking and the bicycle market in Brazil. Counting points for the Union Cycliste Internationale (UCI) world rankings since 2004, CIMTB Michelin has been selective for the Olympic Games in the Beijing 2008, London 2012, Rio 2016 and Tokyo 2020 Cycles. In 2022, the CIMTB Michelin will increase even more its international relevance with the opening stage of the Mercedes-Benz Mountain Bike World Cup 2022, in Petrópolis. In addition, he was responsible for the construction of the Rio 2016 Olympic Games mountain bike track, considered one of the best in the history of the Games since 1996.

About the author : Gustavo Coelho